Does Cell Phone Use Lead to Tinnitus?

Can using your cell phone cause tinnitus? Frankly, at this point, we don’t know the answer to this question, and it’s a little frustrating because there have been a few interesting studies, but not enough follow-up.

Cell Phone Use and Tinnitus 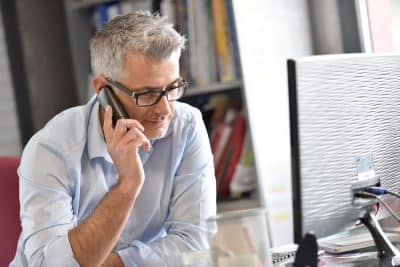 There have been two studies focused specifically on the use of cell phones and tinnitus. The first study used a survey of university students to attempt to link the two phenomena. It was also mostly focused on the possibility of damage because of exposure to sounds. This study failed to find any connection between tinnitus and cell phone use, and noted that the students primarily used their cell phones for texting, not talking.

Another study looking at cell phone use and tinnitus found that there was a connection, especially between prolonged cell phone use and tinnitus. According to researchers in this study, using your cell phone for 10 minutes or more a day could increase the risk of tinnitus by 71%. And among the people who had used their cell phones for four years or more, the risks increased by 95%. This study claimed that the effect wasn’t related to noise, but more likely related to the effects of electromagnetic radiation on the cochlea.

Is This a Real Effect?

Unfortunately, with just two studies that are only weakly comparable, we are left basically at the same place we started. We remain uncertain about the potential link between cell phones and tinnitus. There is also another study that links electromagnetic sensitivity to tinnitus, but it shows no connection with specific radiation sources, such as cell phones, possibly because it didn’t have the statistical power to pick up these associations.

Many Different Types of Tinnitus

Part of the reason why we have a hard time isolating causes of tinnitus is that the condition has so many forms linked to specific causes. If you’re having trouble getting help for your tinnitus, you can try avoiding cell phones, but you might also try other types of treatments.

TMJ treatment has been proven to be very effective on tinnitus, and if you have tinnitus, a TMJ evaluation can determine if it can help you.

To be evaluated for TMJ, please call (303) 691-0267 for an appointment with a Denver TMJ dentist at the TMJ Therapy and Sleep Center of Colorado.

By Dr. Kevin Berry|October 15th, 2014|Tinnitus|Comments Off on Does Cell Phone Use Lead to Tinnitus?