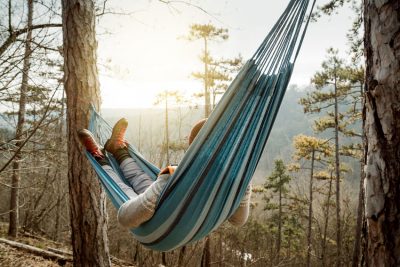 Do you think you can’t do the Colorado Trail or other long hiking trips because CPAP chains you to a power supply?

Hiking ten miles and more a day at elevation is extremely difficult when you’re not sleeping well at night, and you can’t really bring your CPAP with you. But that doesn’t mean you have to give up your hiking trips altogether. A CPAP alternative can help you get not just out of Denver but off the grid.

No Such Thing as “Portable” CPAP

Although manufacturers market and sell things called “portable” CPAP machines, these aren’t really adequate for taking on the trail. They might be reasonable for RV or even car camping, but not backpacking.

Manufacturers say that their machines weigh less than a pound, but that’s not including the hoses, mask, and other supplies. Adding these in brings the weight up to nearly two and a half pounds–without a battery! Add in the battery, and you’re looking at about four pounds for your CPAP machine. That’s about the same as 3 days of food and twice as much as you probably allocated for all the rest of your sleeping gear. (This is a generous estimate. One major CPAP manufacturer touts a five-pound battery pack for camping!)

And even if you decide to lug it along, it won’t do you much good. Even the multiple-night battery for these CPAP machines only lasts about 12 hours. How many nights is that going to help you get a good night’s sleep? Then you’re talking about hauling multiple batteries around, adding even more weight.

Is Sleeping In A Hammock An Option?

Another potential way to deal with sleep apnea while hiking is to use a hammock. This has the advantage of being lightweight and multipurpose. It has the disadvantage of being hard to find good hammock sites. Much of the Colorado Trail is at or above the treeline, and trees are sparser these days in Colorado thanks to the mountain pine beetle and the Rocky Mountain bark beetle.

However, might it work for your sleep apnea, provided you can find good spots to use it?

Of course, if you listen to people selling hammocks, this question is already settled. In blogs and videos, they claim confidently that, yes, sleeping in a hammock helps with sleep apnea. Although it’s true that sleeping with your head elevated (what is called a semi-Fowler’s position) is recommended to minimize postoperative risks for sleep apnea sufferers, there’s no scientific evidence that sleeping in a hammock actually reduces sleep apnea at all. There just have been no studies performed on the question.

In the absence of science, we can fall back on rationalization: it makes sense that the position a hammock puts you in might help, but, then again, it might not. Another piece of evidence we might consider in the absence of studies is anecdotal experience. An online forum of hammock sleepers talking about snoring shows mixed results for sleeping in a hammock. Some snore less. Some snore more. Others snore about the same. This is about the same as people sleeping with their heads elevated.

When it comes to sleep apnea, you don’t want to be relying on an unproven or uncertain solution. Remember, the consequences of the condition are potentially deadly, and even if you go a few days with a poor solution or no treatment at all, it can certainly ruin your trip.

The only real way to know if your sleep apnea might be improved by sleeping in a hammock is to test it. Most sleep centers probably don’t have hammocks for testing, but they have adjustable beds that can be used to see if elevating your head and/or feet might improve your sleep apnea. If you have your own hammock, a take-home test can also be used to gauge whether it helps.

If you are looking for a sleep apnea solution that lets you get off the grid when you hike, consider oral appliance therapy. An oral appliance weighs just ounces, not pounds, and it doesn’t require power. Just put it in before you go to sleep and breathe easy. And without an extra four pounds in your pack, you’ll hike easier, too.

To learn more about this outdoorsmen-friendly CPAP alternative, please call (303) 691-0267 today for an appointment with a Denver sleep dentist at the TMJ Therapy & Sleep Center of Colorado, located near I-25 and Colorado Boulevard in Denver.