Sleep apnea can cause a huge strain on your life. It leads to a wide range of health issues, such as difficulties with cognition, and an increased risk of heart failure, heart disease, and stroke if left untreated. As if all of those conditions were not bad enough, a recent study has shown that you can now add gout to that list. 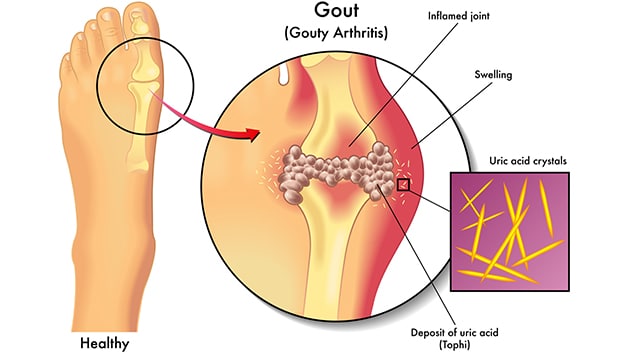 Facts of the Flares

Gout occurs when uric acid builds up and crystallizes in joints and is marked by intense pain and discomfort. In 2007 and 2008 affected six percent of men and two percent of women according to the CDC.

While the exact connection between these two conditions is not entirely clear, it is believed that the lack of oxygen flow associated with sleep apnea contributes to the increased risk in gout. The risk could also be associated with decreased kidney function that is sometimes related to sleep apnea.

What You Can Do About It

Sleep apnea can be treated in a few ways. The most common method is the use of a CPAP machine, and while this method of treatment has proven effective for some, the machine is uncomfortable, so many people don’t use it.

Dental appliances are a good alternative for those who dislike the CPAP. They sit in your mouth in a similar fashion to a mouth guard and adjust the tongue and jaw to improve air flow. There is also surgery for those who are looking for an end-all solution to their sleep apnea. If you are having issues with sleep apnea, or if you have any questions please contact a sleep dentist at the TMJ Therapy and Sleep Center of Colorado in Denver by calling (303) 691-0267.

By Dr. Kevin Berry|November 17th, 2015|Sleep Apnea|Comments Off on Is Sleep Apnea Leading to Gout Flares?