Before the invention of the printing press, all books had to be copied by hand. This made the production of books a labor-intensive process, and each book could take a year or more to copy. The books produced by these scribes remind us that they were being produced by the hands of individuals, and not by the regular action of a machine.

Medieval manuscripts often include personal notes from the scribes, and, of course, there’s the infinitely-amusing marginalia–tiny doodles snuck in by scribes and illustrators into the books they worked on. But perhaps the most human touch in these old manuscripts is the evidence that one of the scribes was afflicted with a tremor. Dubbed “The Tremulous Hand of Worcester,” this man’s work is distinct because of his movement disorder. He lived in the 13th century and worked at Worcester Cathedral, contributing to at least 20 books–considered a high level of output for a scribe of the day.

Now scholars have given us great insight into The Tremulous Hand by analyzing the evidence in his handwriting with the help of a neurologist to “diagnose” this long-dead figure with essential tremor. 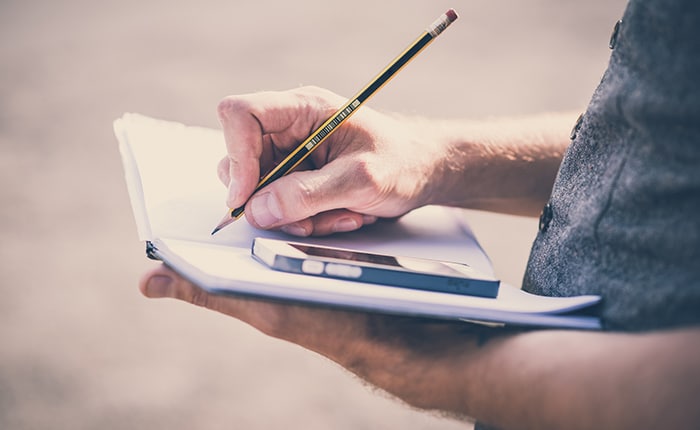 Scholars looking at the writing of The Tremulous Hand identified many of the features necessary to diagnose a tremor. Previous speculation had been based in part on the annotations this author made, which can be identified by his tremor. This included interest in herbal remedies for urinary problems, eye ailments, and cramps. The speculation was that these might correlate with a diagnosis of Parkinson’s disease, although this was later eliminated as a possibility because the associated tremors would likely be more erratic and uneven, rather than the fine, regular tremor seen in The Tremulous Hand’s writing.

New researchers looked at some detailed evidence in the handwriting itself and utilized the insight of a neurologist who helped guide their analysis. Looking at the tremors themselves, they noted that the amplitude of the tremor started out as fine, then increased to fine to moderate. They estimated the frequency of the tremors as being at least 6-8 Hz (tremors per second) based on the number of deviations in a typical long stroke.

They also looked at a particularly intriguing instance where the tremor got very bad at one point, then improved for the next line. They speculate that the scribe’s tremor got worse as he tired, then improved after he had rested (and possibly had himself a drink–mild alcohol was drunk throughout the day the way we might enjoy a soda or coffee as a restorative).

Having dismissed the link to urinary and eye ailments, researchers determined that essential tremor was the most likely diagnosis.

If you have a tremor, it’s likely that the thought of copying entire books out by hand is probably terrifying. Fortunately, none of us has to rely on our handwriting for our livelihood.

These days, few of us rely on our handwriting for anything more than minor personal communication, if that. But tremors can interfere with more modern forms of communication as well, such as making it hard to type or using your smartphone.

Recommended tremor treatments such as medications and surgery often carry risks of serious side effects, so it’s worthwhile considering whether an oral appliance might help steady your tremors and make it easier for you to get work done and enjoy a healthy, productive life.

To learn whether an oral appliance will help with your tremor, please call (303) 691-0267 for an appointment with a Denver TMJ dentist at the TMJ Therapy & Sleep Center of Colorado.