Daniel Fishkin, a Wesleyan University graduate student in music, recently debuted his new creation: “Composing the Tinnitus Suites:2014.” It is a piece that he describes as his life’s work, and one that he hopes will help find a cure for tinnitus. 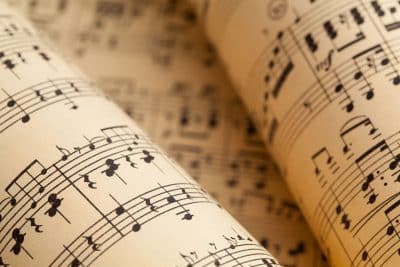 Fishkin first developed tinnitus when he was working on his senior music recital at Bard College.  He talks about the role of music in developing the illness as a betrayal: “I used to think of sound as a neutral phenomenon, and I used to think of music as a benevolent force . . . . Now music can be quite threatening, something not to be trusted.” He found that developing tinnitus made it impossible for him to compose in the way he used to.

In order to create “The Tinnitus Suites,” Fishkin had to develop news ways to approach composition. He began to study electronic circuits and feedback for new ways to create music. Amplified feedback plays an important role in “The Tinnitus Suites,” as does an instrument/art installation of his own creation, which includes 25-foot-long piano wires, carefully installed and adjusted.

Powerful Music and a Powerful Purpose

The reviewer for the Wesleyan Argus praised “The Tinnitus Suites” extensively. It talked about the music in terms that tinnitus sufferers recognize from their own suffering. The composition made the reviewer experience loneliness and isolation with its subtly ear-piercing sounds.

Fishkin stated that the piece was not designed just as music, but also as a way to attempt to gather more awareness and support for a tinnitus cure. He shared the story of William L. Morris as an inspiration. Morris was a sheriff who developed tinnitus after being struck with buckshot. He experienced tinnitus that was so bad, in 2010 he committed suicide. In his suicide note, Morris said he wanted to bring attention to tinnitus so that hopefully a cure might be found.

Although there is no universal cure for tinnitus–because there’s no universal form of tinnitus–many sufferers can reduce or even eliminate their tinnitus with TMJ treatment. If you are a tinnitus sufferer who hasn’t been evaluated for TMJ, you should see whether this option might help you.

To be evaluated for TMJ, please call (303) 691-0267 for an appointment with a Denver TMJ dentist at the TMJ Therapy & Sleep Center of Colorado.

By Dr. Kevin Berry|November 10th, 2014|Tinnitus|Comments Off on Student Composes to Combat Tinnitus