Can your diet be the cause of your headaches? People with migraines blame their headaches on many different food triggers, but research suggests that even for non-migraine sufferers, diet may be a major contributor to headaches.

Studies show that headaches may be caused by salt, which is common and hard to avoid. 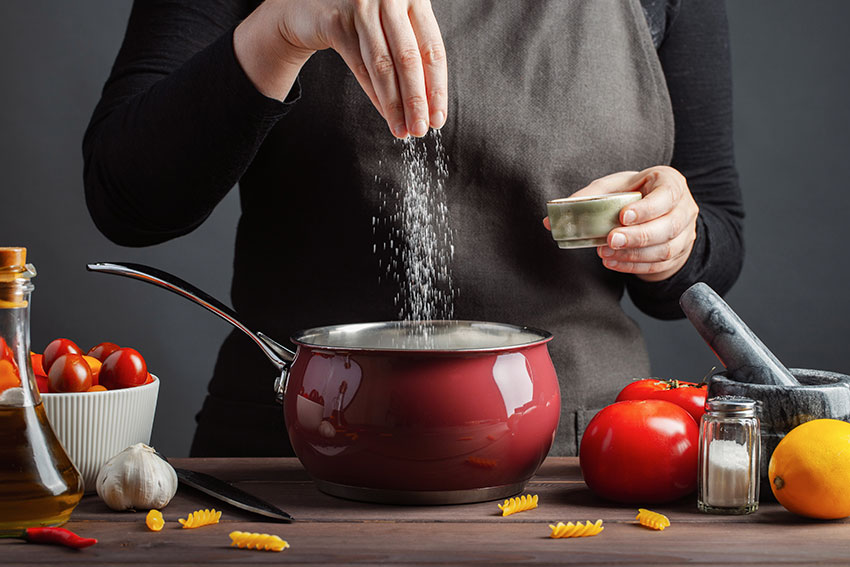 Exploring the Link Between Salt and Headaches

Two important studies point to salt as a significant cause of headaches. In one study from 2014, researchers were trying to see whether a diet designed to reduce blood pressure actually helped people reduce their incidence of headaches. They compared people consuming the standard American diet with those on the DASH (dietary approach to stop hypertension) diet. The DASH diet aims for reduced fat consumption, includes low-fat dairy, and is high in fruits and vegetables.

In a 2016 study, researchers looked at the impact of lower sodium intake on headache frequency. They assigned nearly 1000 men and women to either a sodium reduction or a control diet. Those on the low sodium diet had about 40% fewer headaches.

Researchers monitored the sodium intake levels of the two groups by taking urine tests and found that those on the low-sodium diet were likely consuming about 900 mg less sodium per day, the equivalent of nearly half a teaspoon less table salt. For reference, the recommended sodium intake per day is 2300 mg, while the average American consumes about 3400 mg, a difference of 1100 mg. This study shows that reducing our diets down to the recommended salt intake could cause us to have about 40% fewer headaches.

A Complicated Link Between Salt and Migraines

While these studies suggest that eating too much salt might be a cause of headaches, there is some research that suggests people with migraines might need more salt.

A 2016 study used the National Health and Nutrition Examination Study (NHANES) to compare the dietary intake of sodium to the risk of migraines. They found that people with higher sodium intake had a slightly reduced risk of migraines. This supports the claims that people with migraines might need additional sodium to help their brains function because of different brain configurations.

The easiest way to control your sodium intake is to prepare more food at home. This allows you to control just how much sodium goes into your food. And it’s important to remember that prepackaged ingredients can contain a lot of sodium, too.

For example, if you use tomato sauce to make your marinara, you might not reduce your sodium at all over prepackaged marinara, while tomato paste or crushed tomatoes will give you a significant reduction.

Reading labels will guide you to lower-sodium options, and you can further reduce sodium intake in canned food by rinsing beans and vegetables before eating.

Remember to rely on spices to flavor your food. This can reduce the need for salt to make food palatable. Experiment with new and different spices to find ones that you like but might not have tried before. Avoid salting food twice. You should either add salt to food when preparing it or add salt at the table, not both.

Restaurants tend to add a lot of salt to their foods. It’s a cheap way to increase flavor without adding quality ingredients. Ask servers about lower-sodium options and see if you can get less added salt.

Still Have Headaches in Denver?

What should you do if you have reduced your sodium consumption and you’re still experiencing headaches? It might be time to start hunting around for alternative treatment options.

One common cause of headaches most people aren’t told about is TMJ. TMJ is a jaw dysfunction that can lead to headaches, including migraines.

If you are afflicted by persistent headaches and other treatments don’t seem to work, Denver TMJ dentist Dr. Kevin Berry may be able to help. Please call (303) 691-0267 or use our contact form to request an appointment.